By Shawn Monk February 16, 2020
After the lease for our Honda Accord Hybrid ended, we decided that we needed something a little larger. We realized that we didn't have any vehicle that could carry something larger than a small (maybe medium?) box. So I set out searching for something that might give us a little more flexibility.
I looked at trucks and while I wasn't looking for something new, the used prices on any decent truck was way more than I was willing to pay. Having had a 1999 F250, I was also weighing exactly how usable a truck would be for the majority of our driving. I just couldn't make the higher cost, lower options and lesser practicality balance in my book. So I kept looking....
As with everyone these days, I started looking at SUVs - it seemed a natural progression. Apparently, I'm not alone. The demand for new and used SUVs (and the death of many new sedans in favor of SUVs), quickly showed me I was late to this game. I was hoping for something around the $15-20k range, maybe a little lower - since I didn't need it to be perfect, just comfortable and reliable.
What I found was that there were really few options for anything in the five to six year old range. Mostly due to price - they were far above my budget and I quickly wrote them off. The ones that were left in my price range were mostly at least eight or nine years old. And the were almost all higher mileage vehicles. Then I found the beauty of German depreciation - specifically Mercedes-Benz depreciation.
The ML and GL class, seemed to be good candidates, so I began learning about the possibilities. I started focusing on pre-2012, mostly because I liked the idea of normally aspirated engine, and a desire to avoid potential future complications of the more "advanced" engines.
Of course, there are known issues with the GL's including the air suspension. But, while expensive, the fixes were long lasting and the transmission and engine were known to be fairly reliable. One of the most significant selling points, at least for me, was that unlike other SUVs I was considering, the Mercedes tend to have owners who consistently maintain their vehicles. I was willing to gamble with this knowledge and find one that had a pretty consistent maintenance history in the hope that I'd be able to minimize potential future issues.
I happened to find a 2008 ML550 at my local indy shop and took it for a spin. I was very impressed with the handling and the power...very, very impressed. But not so impressed with this example. It was clean, but had some cracks in the bumpers and some significant scuffing of the wheels - things that could be fixed, but not necessarily things I was interested in fixing while still gambling on some of the potential larger expenses.
I was definitely hook on the 550s and started digging in earnest. I found some nice examples in my price range, but then I came across a 2011 GL550 with just under 100k for around $14,500. I new I was gambling, but the silver would match my 2002 CLK430 and I was hooked. I bought mine knowing that at least one of the air struts was bad. And it needed new tires. And it needed to be caught up on some routine maintenance items, but earlier this month I drove to Cleveland to bring my new-to-me car home.
I quickly ordered new tires - opting for Continentals after scouring reviews online for days. So far, I'm very happy with the choice! I also replaced all four air struts with new Arnott's - having a lifetime warranty on such an expensive item just made sense and it gives me piece of mind. My indy shop knocked out all of the maintenance, including the flushing and replacing all of the fluids and oils, just because I was lazy and they needed it to mount the tires anyway. And it as cold. And I'm lazy. But I now feel much better knowing that it's current on everything and ready to roll.
So, for now, here's my newest addition: 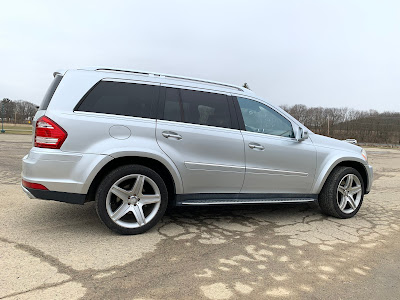