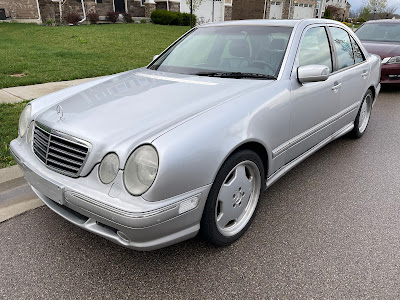 I think this was probably COVID induced dementia, but my daughter wanted to learn about working on cars and I was bored and looking for a project car. Somehow, I found this listed in Indianapolis for a very reasonable prices. As I started digging into the car, I began to understand why.

This particular car has almost 225k miles. And it has a spotty overall service record - but it does have a clean Carfax. And the previous owner spent a significant amount of money on the mechanicals. I have to admit to always harboring a desire to own a true AMG car and I'm sure that clouded my judgement on this one.

When I went to check the car out, it was raining and cold. Not an ideal time to actually look at a car and I missed the failing clearcoat while I focused on the mechanical condition. In the rain. The cold rain. While my spouse waited patiently in the GL550. This was really only my first mistake.

I also missed the significant crack in the windshield. How I missed it, I have no idea. But I didn't notice it until I was almost home. Clearly I should not ever plan to purchase a car in the rain. I also skipped the PPI - mostly because the price was so low it seemed unnecessary. This was mistake #2. They surely would have caught the windshield. And the warped front brakes.

Mistake #3 was not researching the actual cost of some of the general maintenance items on AMG cars. Specifically front rotors. I was ready for Mercedes prices after just having replaced rotors on pads on my GL550 and assumed (falsely) that prepared me for owning an AMG.

After buying the car and driving it home, I realized the front rotors were so warped, it made every stop and adventure. This would need to be the first thing fixed - just so I could drive it and figure out what else might need my attention. A quick series of searches later, I was introduced to the new world of AMG prices. The front rotors along were going to run about $500 - a figure that made my GL550's rotors appear completely reasonable. But being committed to this new adventure, I placed the order and then waited for them to arrive.

I also learned the tires were nearly bald. This was Mistake #4, for those of you keeping score. I didn't really get on the car during my test drive (Mistake #5), otherwise I would have noticed that even moderate stab at the throttle would be enough to break the rear tires loose. For the time being, I'm still holding on ordering new tires and am committed to only driving on dry roads until I do.

So why am I holding on the new tires? Well, here's my current list of fixes that need my attention:

See the problem? In addition to the $500 I already spent on the front rotors, I'm looking at another $2.5k just to get in reasonable shape to use. Add in another $2-3k for a decent respray and its easy to see how these car can suck the cash out of your bank account in a hurry. My good deal has me pausing to consider just how much I want to put into a car that will probably never be worth it.
On the pro side of the equation, which is what is keeping me from selling it and moving on, is that driving this car is AMAZING. It is easily the fastest car I have ever driven. Granted, I haven't really driven many fast cars, but the power this engine puts out seems to know no end. Its like a drug, and I'm addicted to it. The GL550 is fast and smooth, but refined. The CLK430 is powerful, but not really fast. This is fast and begs to be used. I don't know how I could part with it now that I've driven it.
So, for now, I'll wait and see. This may be a multi-year project to give me time justify the repairs and evaluate just how deep I'm willing to dig to keep it. Or it may windup donating its monoblocks to my CLK430 and finding a new home. I really don't know what tomorrow will bring. But I'm hoping its a dry, sunny day.

By Shawn Monk February 16, 2020
After the lease for our Honda Accord Hybrid ended, we decided that we needed something a little larger. We realized that we didn't have any vehicle that could carry something larger than a small (maybe medium?) box. So I set out searching for something that might give us a little more flexibility. I looked at trucks and while I wasn't looking for something new, the used prices on any decent truck was way more than I was willing to pay. Having had a 1999 F250, I was also weighing exactly how usable a truck would be for the majority of our driving. I just couldn't make the higher cost, lower options and lesser practicality balance in my book. So I kept looking.... As with everyone these days, I started looking at SUVs - it seemed a natural progression. Apparently, I'm not alone. The demand for new and used SUVs (and the death of many new sedans in favor of SUVs), quickly showed me I was late to this game. I was hoping for something around the $15-20k range, maybe a little
Post a Comment
Read more